This weekend Dan and I will be celebrating our 11th wedding anniversary. The past few days I have been thinking about our love story, and the more I think about it, the more thankful I am.

In 2004, I was 18 years old and thinking about my future. I made the decision to go to Africa after high school, however a few weeks before graduation, my plans fell through. I had no idea what I was going to do, so I started working at JCPenny. In October 2004, someone very close to me passed away and the guy I thought I would marry broke up with me. I was devastated and thought for sure my life was over. I had no idea what God was doing, but I made the decision to go to bible college.

I started at Trinity Bible College in January 2005. I was 19, scared and had no clue what I was doing. I cried when my parents drove away and was sure that I was making the worst decision of my life. Thankfully I was wrong, my first semester at bible college was amazing. I made the best friends, grew so much, and had the most fun.

When I went home, it seemed that everyone asked me if I had met anyone. Was I engaged yet? Married yet? I had to at least have a boyfriend, right? That’s what bible college was for – wasn’t I working on my “M-R-S Degree”? Even though everyone was joking, by the time I went back to school in the Fall of 2005, I felt broken. How had I made it an entire semester at bible college without meeting someone? I was 19, but since I hadn’t met someone after my first semester of bible college, I was probably bound to be single forever.

My first week back at school, I remember laying on my dorm room floor and telling God that 2005 was going to be His year. I didn’t want to feel broken anymore, and I didn’t care about anything but Him. If He wanted me to meet someone, He would have to throw me into their arms.

A few weeks later, the all girls music team I was on joined up with an all guys music team for an event. Dan was the drummer for that all guys team. The weekend of the trip, Dan wasn’t sure he would be able to go because he had been bitten by a spider and his hand was swollen. By God’s grace he was able to go. “Somehow” we always found our way around each other that weekend! Thankfully he appreciated my awkward flirting and he even let me beat him at checkers a few times! 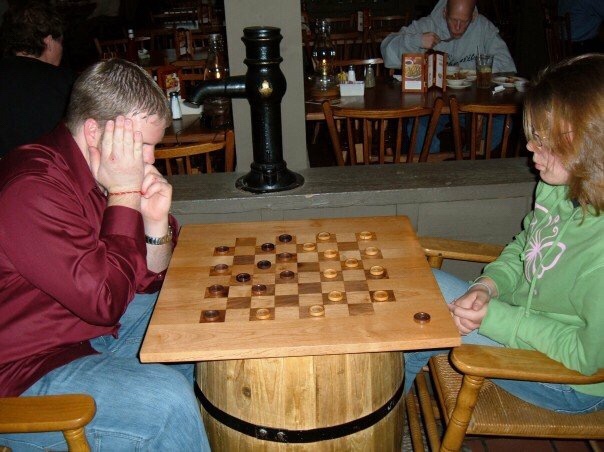 The first night of our trip, we preformed in front of what felt like 2,000+ people, but was probably closer to 400 or so. As we walked off the stage, our professor asked Dan to help the ladies off the stage. As he turned to help me off the stage, he made a goofy face, which made me laugh. If you know me at all, you know I am not the most graceful girl ever, so my laughing made me trip off the stage… right into Dan’s arms. I literally fell off the stage into his arms. So embarrassing, but let’s be honest, the cutest answer to prayer ever!

A few days after returning from the trip, Dan took me on a group date. We went to see the movie Flight Plan. I am sure all of his friends hated us, because we sat and made fun of the ridiculous movie, but we didn’t care. We were in our own world. After that weekend, we were pretty inseparable.

I will never forget, just one week after meeting, when Dan told me he liked me. We were talking well past midnight on the phone, and he said “I am terrible at communication, but I like you. A lot. I don’t know what to do about it, but I want you to know.” Everything about that moment was my favorite. Honesty is important to me, and the fact that he was honest enough to tell me from the beginning that he wasn’t the best at communication, but he was willing to work on his communication skills with me… it meant the world.

Three weeks after meeting, we went on our first official date. I was full of butterflies, but I knew I liked this guy. A lot. After that first date, we did everything we could together. 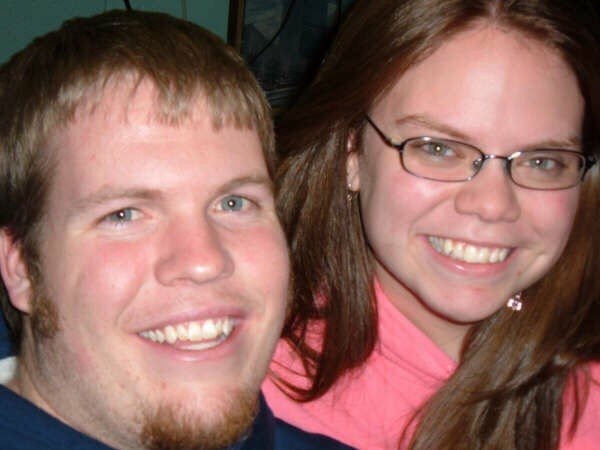 In early 2006, Dan took me home to meet his parents. I was so nervous. I had never met parents before and I had no idea what to expect. His family was amazing, and I immediately felt right at home. It was in his parents living room, that Dan told me he loved me for the first time. If there was ever any doubt about forever with this man, it went away that night. He was who I wanted spend my forever with.

A couple months after Dan and I started dating, I started having terrible headaches and lost feeling on the left side of my body. Both Dan and I were on college traveling teams for the summer, but due to my health issues, I was unable to travel. So after the Spring semester of 2006, Dan and I spent the first month of summer together before he would travel. We visited both our parents, and I got several tests done. While we were visiting my parents, Dan asked for permission to marry me. My Dad said yes! 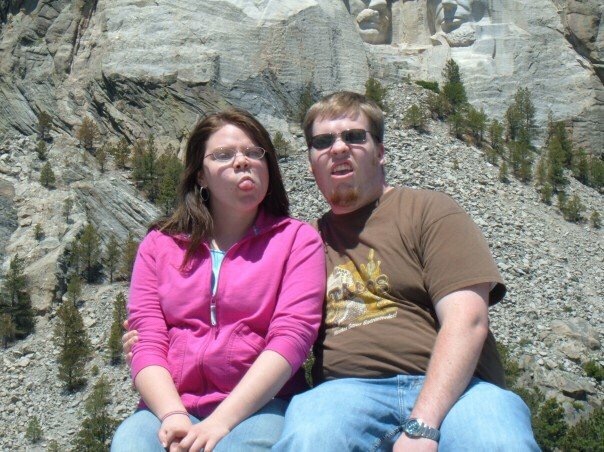 The day Dan left to travel for the summer, my doctor called and said he had found a spot on my brain. He wasn’t sure exactly what it was, but he wanted to run more tests. I felt like my world was crashing down around me. When I called Dan to share what was happening, he simply said “Start planning our wedding. No matter how long you have, I want to spend my future with you.” 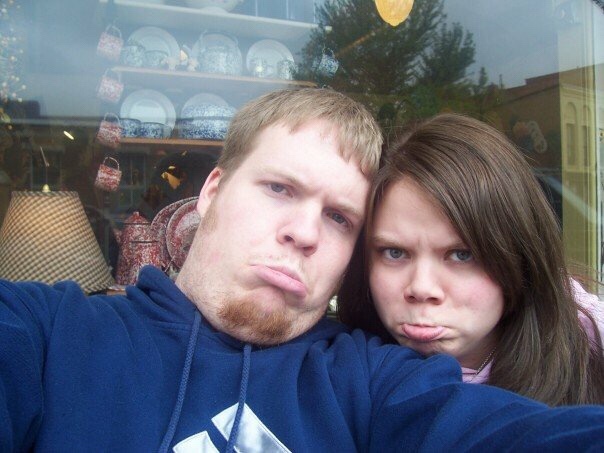 So that’s what I did. My Mom and I went wedding dress shopping, before there was officially an engagement ring on my finger. All summer, I dreamed of marrying the man of my dreams, which distracted me from all the scary things the doctors were telling me.

Thankfully,  we learned that the strange mark on my brain was nothing to be concerned about. The doctor’s felt that I had a stroke before I was born, and noted that the headaches and health concerns I was having were not related to the mark. It’s a story for another day, but the fact that I have no health concerns related to that mark is really a miracle! Thankfully, we also got to the root of my headaches, and all the strange side effects I was having also went away. 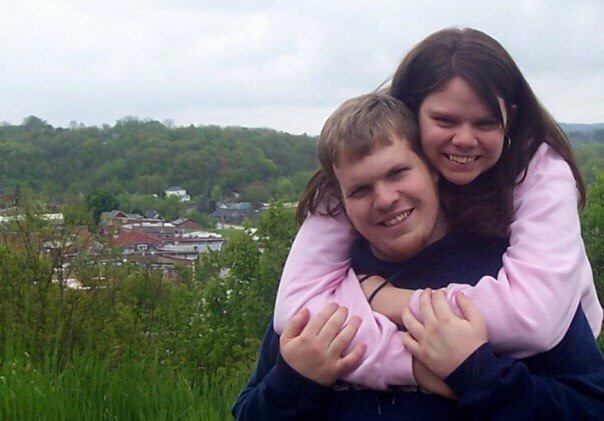 Returning to campus, and getting to see Dan after a summer apart was so exciting. We had so much to celebrate! We were so thankful for my health and so thankful to be together. In October 2006, 11 months after starting to date, Dan took me out to look at the stars. While stargazing, he pulled me close and asked me to marry him. I said yes and then promptly complained that he proposed in the dark when I couldn’t see the ring! HA!

On May 5, 2007, I walked down the aisle and started the greatest adventure of my life. It was a small wedding in Ellendale, North Dakota. Dan’s childhood pastor married us and our families and college friends watched us exchange our vows.

The wedding was quick and simple, but it was perfect.  My dress was way to big (thank goodness for dress boning and sleeves) and our cake was served with a knife I licked (sorry if you ate cake – it had my germs on it), but it didn’t matter. I think the entire church could have burned down that day, and I still would have said it was perfect simply because at the end, I got to be Dan’s wife. 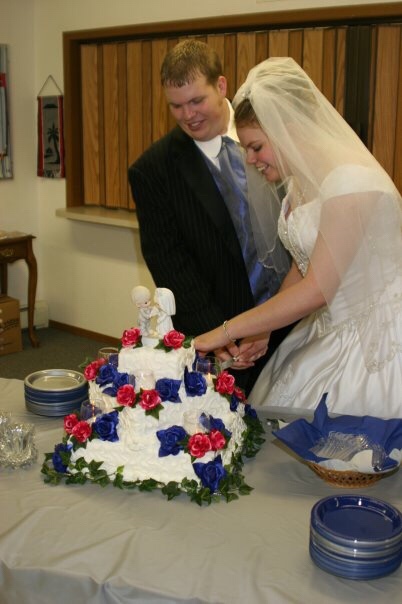 The past 11 years have been full of ups and downs, but Dan continues to be just what I need. I had a long list of what my dream husband would be, and Dan has fulfilled every prayer, plus more! From the moment I tripped and fell into Dan’s arms until now, he has continued to catch me. He is an amazing leader that provides for and keeps me safe. He is my best friend, and I can’t imagine spending my days with anyone else. Plus, he is so good looking – I am blessed!

As I look forward to the next several years, I can’t wait to see what adventures God has in store.

Happy anniversary Dan! Thank you for making me brave, following me all around the country, and loving me when I feel broken. Thank you for laughing with me (and at me) and making the best memories. Thank you for putting me first, and spoiling me like crazy. Most of all, thank you for being you! I couldn’t imagine doing life with anyone but you!