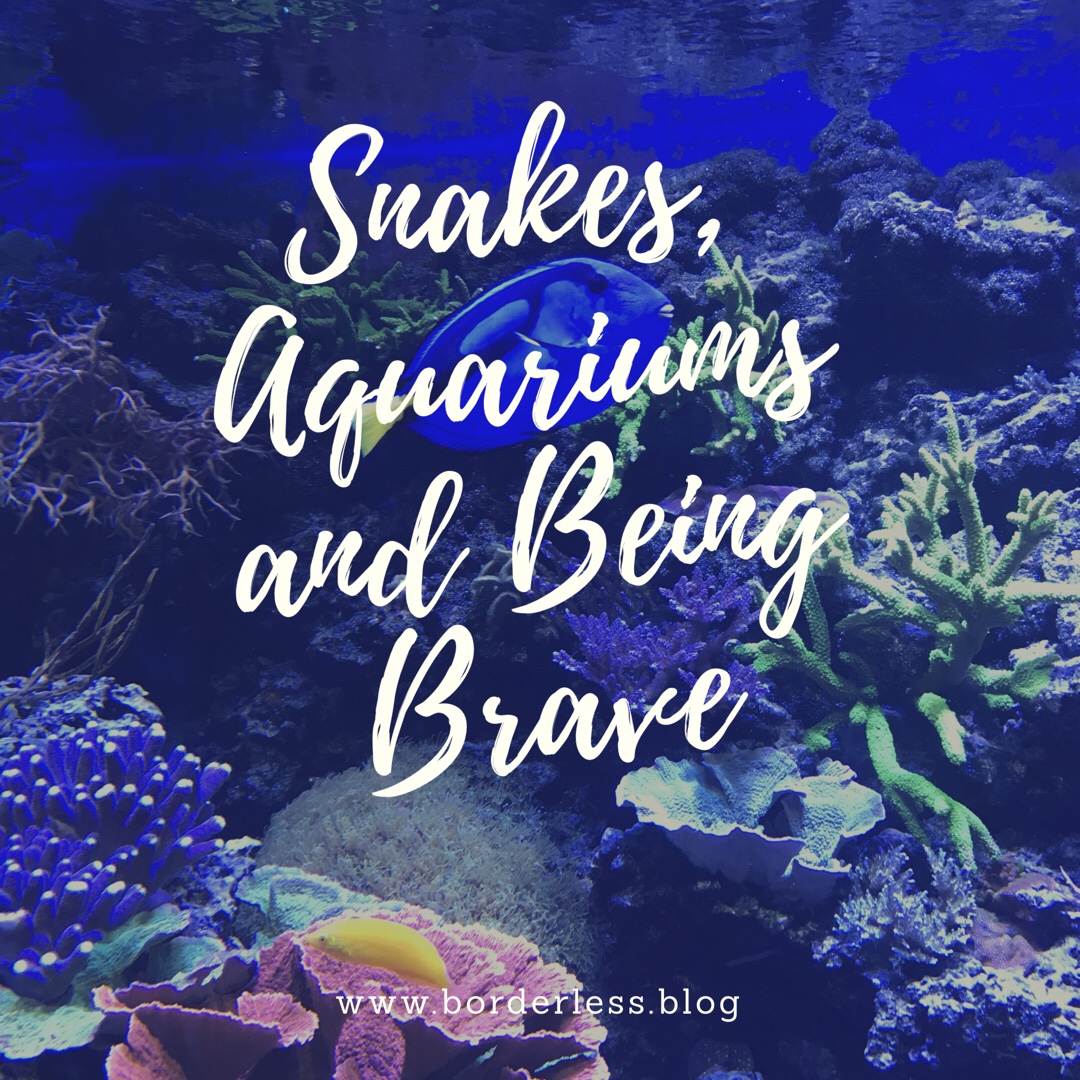 For my birthday, Dan took me to an aquarium. I was so excited. After a few exhibits, we walked into a large two story room that had a huge fish tank. We entered on a large balcony and stood there for several minutes looking at the tank. We were being goofy, naming the fish and imagining what they were saying to each other.

We turned to continue walking around the balcony that would lead us to the stairs and down to the lower level of the room, and that’s when I saw it. A snake. OUT IN THE OPEN. No glass enclosure. Just a guy holding it. It was probably at least 100 feet long, but I can’t say for sure because I only looked once. I grabbed Dan’s arm before he even saw the monster. We were in the process of quickly passing the first snake, when there was ANOTHER snake. Yes, two snakes out in the open AT AN AQUARIUM.

Now, I don’t know what you imagine when you hear the word “aquarium”, however in my mind “aquarium” means fish NOT SNAKES. When we got to the bottom of the stairs, there was a third snake and I literally almost died.

This is not what I imagined. I wanted to run. I wanted to get our money back and never come back. However, if I wanted to leave we were going to have to pass the snakes again. That was not an option. My obvious choice was to just die right there. I do realize this is a tiny bit dramatic, but you have no idea how terrified I am of snakes!

Then, 2 Timothy 1:7 popped into my head: “For God did not give us a spirit of fear. He gave us a spirit of power and of love and of a good mind.” I stood there for a second and realized that fear is not of the Lord. God has given me power and a sound mind. Philippians 4:13 promises: “I can do all things because Christ gives me the strength.” I could do this. So for the next several steps, I held on to Dan’s arm saying “I can be brave. I can be brave. God give me strength. Fear leave. I can be brave”.

I probably looked so ridiculous. Quoting scripture under my breath while holding onto my husband’s arm for dear life at the aquarium, but it is the only thing I could do to make it through.

At one point, we walked into a room with a swamp theme. (This was not a traditional aquarium at all – there was a live bear at one point!!) Dan told me to stay still and went into the first exhibit to check to see if they had any snakes. When he came back, I realized that I could be braver and started walking behind Dan through the exhibits.

As we continued through the swamp room, Dan warned me of several snakes behind glass. With each snake I got a bit more brave. At one point, I stood behind Dan on my tippy toes looking at a snake saying out loud “I can be brave. I can be brave”.

The last snake we saw was a python. It was huge. It was in a stairwell that we had to walk through to get to the next exhibit. At first, I didn’t know if I could do it. But then, Dan grabbed my hand and said “Just walk quickly! You can do this!” So I put my head down and started walking. As I got to the point that I was right in front of the exhibit, I looked up and saw the snake shedding it’s skin. It was amazing. We didn’t stay there long (because the snake obviously could have gotten out of the enclosure at any minute), but if I wouldn’t have looked up I would have missed something pretty incredible.

That night, I was writing in my journal and it hit me. I think my journey though the aquarium is a little bit like my journey through life.

There has been times in my life that I have been terrified. I don’t know how to move forward and I can’t possibly go back. The bible says this in Deuteronomy 31:8:

Just as Dan went and checked exhibits before I walked through at the aquarium, the Lord does the same in our lives. He goes before us to prepare a way. And just as Dan stood in front of me to protect me from the snake enclosures, the Lord stands in front of me to protect me. As much as Dan loves me, it pales compared to the love the Lord has for me. Dan can’t always be with me, but Jesus is always with me. I have no reason to fear.

If you are wondering, once we got past the python there weren’t any more snakes. The  beauty of the aquarium (plus the random bear) and the memories made with Dan were worth the trouble of seeing the snakes. I would totally do it again.

I know this story is a bit silly, but I hope it reminds you that whatever you may be going through,   whatever the “snakes” look like in your life, to put your trust in God as He’s got it all under control. He’ll be right there, walking with you, checking things and being your strength as you proclaim “I can be brave.”